under the sea and onto our plates!

After a trip to the specialty food market this AM for some dinner inspiration, I happened upon the fish counter… While looking around at what were some real beauties, I noticed that there were gorgeous handmade lump crabmeat, crab cakes being prepared! I have always made crab cakes in the past, but they weren’t even making it into the casing [people were buying them like they were gold] so I knew they must be a hot commodity and a must try…
To cook these thick, circular lovelies, a touch of olive oil in a cast iron pan and into the oven until browned and golden on each side!
Once cooked, these gorgeous ‘coins’ were rested on top a bed of baby spinach that I sautéed with some rendered pancetta…
The crab cakes were incredibly light, but full of intense flavor! They were definitely the right choice… Now I grasp why those people were intent on getting their hands on them! 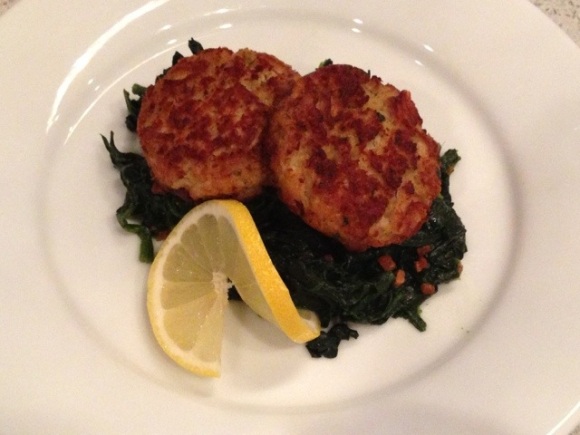 Tonight was a perfect night for grilling some meat, but not just any meat… gorgeous hanger steaks!
I picked up some real beauties at the butcher, got them home and slapped on a great marinade. To make the marinade I needed some mustard, garlic, crushed red pepper, fresh rosemary and lemon juice! Once combined, I rubbed my meat with the marinade and tossed it into the fridge to chill out and get all cozy.
Once ready to grill, the steaks were cooked for five minutes on each side and then rested for another ten. The steaks were juicy and full of intoxicating flavors!
As a side to my steaks, I thought a ‘spin’ on spinach could be interesting… So I decided on sautéing grapes and mixing them with the spinach. I was a bit apprehensive about the combination, but have to admit… there was practically nothing left. It was delicious!! The sweetness from the grapes played nicely against the earthy spinach. Next time I make this, I will be buying extra spinach!!
I feel like I ate enough for an entire family… well no regrets here! 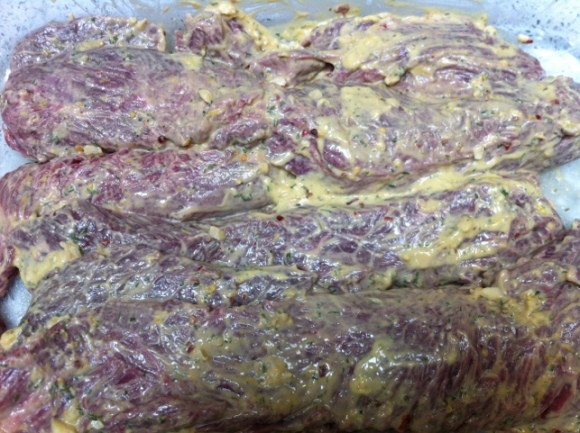 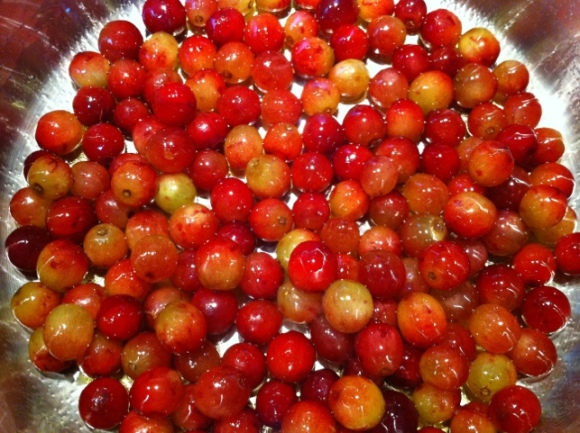 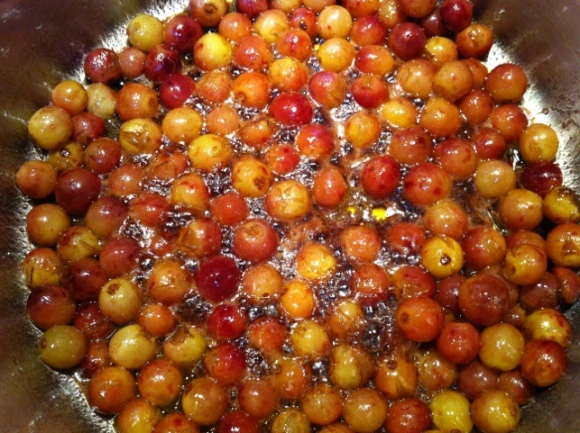 I’m as stuffed as those ‘chops’!

After having a stuffed veal chop this past weekend, I craved another! I stopped at the butcher and he had beautiful meats lining the cases…. so I thought what would be the best piece of meat to stuff other than a veal chop? They didn’t have bone-in pork chops in the case, but I asked the butcher and he gladly prepared two ‘chops’ for me cut an inch and a half thick. The special thing though was rather than a regular boring old ‘chop’, he cut it for me in the style of a porterhouse steak! With that cut, I was given the same idea as a steak, but from a swine… a sirloin and a filet!!
So to stuff my pork ‘chop’ I made a combo of spinach, rendered pancetta and shredded fontina cheese. This enticing stuffing was generously shoved into the pocket of the ‘chop’, then breaded and baked off. After thirty-five minutes, out came a succulent stuffed ‘chop’ yearning to be layered on my plate next to some light-as-air mashed yukon golds. To make my mash fluffy and light, I pass everything through a food mill [one of the best kitchen items I ever purchased years ago].
To drape over my ‘chop’, I threw together a sauce made up of mascarpone, dijon, onion and some good marsala wine. Delightful!
Time to enjoy one more glass of wine now.

So my palate changed from Spanish cuisine to Italian as fast as the wind blows… A last minute call and dinner at our favorite resto, Amore was the place to be!
The appetizer I chose was a light as air arancini filled with a cheese, meat and peas with a side of tomato sauce. For my main, a stuffed veal chop topped with a mushroon cream sauce. Prepared milanese-style, filled with cheese and spinach with sautéed vegetables and a mashed potato on the side.
A fantastic white was the perfect accompaniment to this meal, but a double espresso with a hefty glass of sambuca was a great ending!

a flat iron, not just for hair anymore…

Tonight for dinner… flat iron steaks on the grill with a side of spinach sautéed with garlic, crushed red pepper and grated pecorino romano. One word… AMAZING!
I seasoned the steaks liberally with kosher salt and that was it. Onto the hot grill and ten minutes later and perfectly done! The steaks were juicy and delicious.
As for the spinach… I sautéed garlic and onions in olive oil, added some crushed red pepper [I’m assuming everyone sees a trend when I cook] and then tossed in the grated pecorino romano and stirred until completely incorporated and melty! It was truly like heaven on a plate.

So pasta was the decision for tonight’s meal, and an Oscar worthy one at that. Just a simple oil and garlic sauce that gently clung to the fettuccine. A light and fruity extra virgin olive oil was gently heated with minced garlic and some crushed red until just before the garlic would burn… I also add in some extra [but secret] flavors that elevate this sauce from oil and garlic to OIL and GARLIC!! To mix things up, I tossed in some organic baby spinach and sundried tomato, along with freshly grated pecorino romano. The baby spinach gave the dish a light and fresh taste, and cleansed the palate, while the sundried tomato offered a certain sweetness to balance out the saltiness of the pecorino romano.
Now to sit down with a nice glass of wine, flip through the channels and enjoy the rest of this perfect Sunday evening! 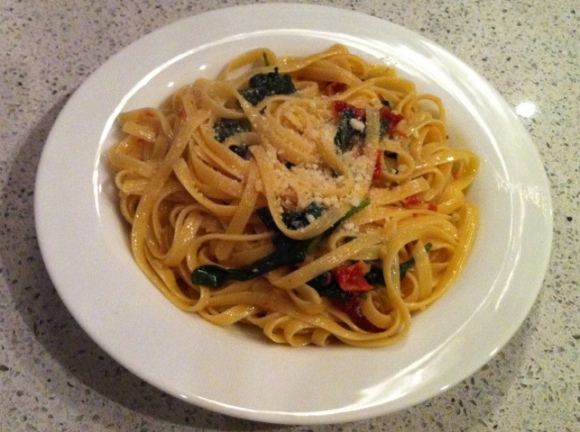